New Japan Pro Wrestling Is Back! 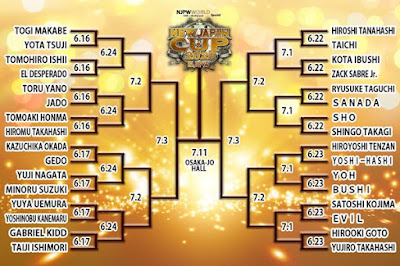 Ever since, the beginning of the current world wide pandemic that we are currently still in, sports have been non-existent.  However, wrestling in America was still going strong without crowds, specifically, the main stream wrestling companies, WWE and AEW.  Japanese wrestling however has been non-existent, until now.  New Japan Pro Wrestling, is back, and it's returning with the New Japan Cup.
The New Japan Cup, an annual event usually taking place in March, leading to the winner getting a Heavyweight Championship match, at an April event in recent years.  This year however, because of the aforementioned pandemic, that didn't happen, this year it's happening in June and July, leading to their second biggest pay-per-view event of the year, Dominion and a main event Heavyweight and Intercontinental Championship match, with Tetsuya Naito.
I couldn't be more excited for this event and the event is stacked with talent.  This is gonna be very telling where they plan to go from here.  Guys like Tomohiro Ishii, Hiromu Takahashi, Kota Ibushi, and of course Kazuchika Okada, all look primed for big performances.  I think it's clear that travel issues and scheduling conflicts are probably keeping certain people from being a part of the tournament.  One missing name that really stands out is Will Ospreay, a talent that seemed primed to breakout as a star, now that doesn't mean that he won't.  With the G1 Climax taking place in September and October this year, I think he is being prepared for a big performance there.  Not having him in this tournament at all is kind of odd, considering he lives in Japan, the only thing I can think is probably a scheduling conflict.
The only thing I hope is that Okada doesn't win, because, despite New Japan being absent for a while I don't want this tournament leading to a rematch between Okada and Naito again.  Knowing New Japan, and their booking style especially in my time of watching it, since 2014, that is the go to.  Okada isn't the champion so he has to win the tournament or big matches leading to a championship match.  Without being very blunt, I'm sick of it.  Looking at the bracket, he has the easiest path to the semifinals.  Is that a coincidence, absolutely not.  It's the New Japan way.
Back when they were getting ready for their 48th anniversary show, the tradition recently has been the Junior Heavyweight Champion having a non-title match with the World Champion, that show never happened because of again, the pandemic.  So to me, this tournament, leading to a Dominion match would be a great place to have that match.  Hiromu vs. Naito is a money match in my eyes, and a lot of other peoples eyes.
The same argument can be made for the likes of Tomohiro Ishii, whose been so close to that true championship opportunity, or Kota Ibushi, who seems pegged to be the next face, and part of me sees a good showing in this tournament but waiting for a bigger win like a G1 and Wrestle Kingdom main event.
I for one and super excited New Japan is back, I can't wait to watch this tournament from start to finish, I can't wait to have the hard hitting style, and straight up wrestling of New Japan back, and coming this weekend I will have a prediction article about this entire tournament discussing every match, so look out for that, and rejoice wrestling fans because New Japan is back and I couldn't be more excited about it.
Hiromu Takahashi Kazuchika Okada Kota Ibushi New Japan Cup New Japan Pro Wrestling NJPW Tetsuya Naito Will Ospreay wrestling