AEW Double or Nothing Predictions 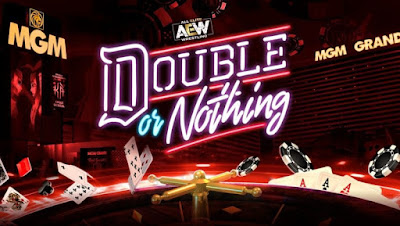 
MikeJC here back again, Money in the Bank has come and gone, there was good there was bad, but I'm not here to talk about WWE.  Today I'm talking about All Elite Wrestling, Double or Nothing the first official pay-per-view event for AEW.  By now everyone knows the story, Cody and the Young Bucks put together All In last September, Tony Khan a huge wrestling fan and billionaire got behind there passion and helped them start this new brand.  They announced there partnership with TNT as well which is huge to get on a big network right away this fall.  The thing about AEW is this is a company by wrestling fans, for wrestling fans.  No politics, no drama behind the scenes.  Also they aren't doing this to compete with WWE.  They are doing this because they have a passion to create in the business that they love and give real fans an alternative. You don't have to choose, you can just love wrestling and watch both WWE and AEW as you please.  Also on how they have built stories on multiple YouTube channels has been very well done as they did for there stories for All In.  I will say I personally, don't know everyone and am excited to see new talents showcased on this level and hope that this helps the business of wrestling in a positive way.  So I'm gonna run down the matches on the Double or Nothing card and give my predictions and thoughts on everything.