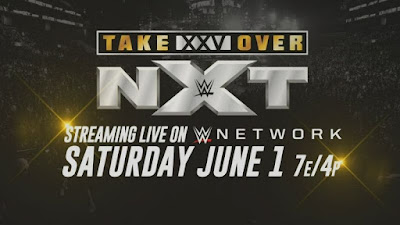 So back on May 29th, 2014, the very first NXT Takeover event took place.  Almost five years to the date we have arrived to the twenty-fifth installment.  This weekend is NXT Takeover XXV is this weekend, and it's also the first takeover event to not precede a main roster pay-per-view.  This takeover event gets to stand on it's own, and with the card we have to look forward to it's sure be a giant success and prove takeover events don't need the backing of a big five pay-per-event to be a success.  So with that said I'll be breaking down all the matches on the card for NXT Takeover XXV.
Roderick Strong vs. Matt Riddle
I'm very excited to see this match, it has the potential to be one of the best matches on the card.  Matt Riddle has basically been feuding with Undisputed Era on his own, and this match came about when Adam Cole lost a one on one match against Riddle, Roddy got blamed for the loss, then the following week Roddy claimed to have attacked Riddle seemingly "taking care of him" for Cole.  So this match has a real personal feel to it.  Part of me doesn't see Strong winning at all but, the possibility of other Undisputed Era members getting involved.  Riddle will probably win, and I'm sure it will be a great match.
Vacant NXT Tag Team Championship
Fatal 4 Way Ladder match
The Street Profits vs. Burch & Lorcan vs. The Forgotten Sons vs. Undisputed Era
The main problem I have with this match is it should definitely include The War Raiders (as I've said in the past they will remain the War Raiders, Hanson and Rowe, and I'll never acknowledge their very unnecessary new names).  The War Raiders vacated the NXT Tag Titles, I guess because they are on the main roster, but you wouldn't know if you didn't watch Raw or Smackdown in the last month cause they haven't been featured on either show.  So them giving up the NXT Titles made little sense to me.  Losing them here and not getting pinned wouldn't have hurt them at all.   Regardless, all of these teams can stake claim to the tag titles here.  Other then Undisputed Era, the other three have been building to an eventual title run.  What I don't understand is the constant dislike or supposed over pushing of the Forgotten Sons who have gotten the most TV time of the three teams that never been the champs.  The one team I'm not too fond of is The Street Profits, I don't know why, but they have their moments of great in ring work.  For me I can honestly see the Undisputed Era winning here because I'm sure Adam Cole's proclamation of all of Undisputed Era having a title will come true.
NXT North American Championship
(C) Velveteen Dream vs. Tyler Breeze
I am so excited about this match.  Velveteen Dream is a huge star already, he has everything it takes to be a future world champion.  As for his opponent, Tyler Breeze, he's needed another NXT run for way too long.  His main roster run has literally gone nowhere, he did nothing as a singles, and the Fashion Police was hot at a point that also went nowhere, and with Fandango out for over 9 months, Breeze needs to be rejuvenated big time.  I honestly could see Tyler Breeze winning because I can see Velveteen moving up to the world title picture.  I can also see Roderick Strong taking the title from Tyler Breeze rather quickly for the Undisputed Era to get every belt.
NXT Women's Championship
(C) Shayna Baszler vs. Io Shirai
If you had asked me in April who the NXT Women's champion would be in June, I definitely wouldn't have said Shayna Baszler.  Now I can't ever see her losing the title.  I would've said she'd be on the main roster by now, but is that really a good idea these days.  With that said this is going to be a very good match, I don't see Io winning it, right now.  I think they are building to something bigger, that may also include Bianca Belair, Mia Yim and Candice LeRae or some combination of the three and Io getting the title further down the line.  So I'm picking Shayna here, should be a stellar match though.
NXT Championship
(C) Johnny Gargano vs. Adam Cole
At NXT Takeover: New York, it was supposed to be the final chapter of Gargano and Ciampa.  Ciampa got injured, and Adam Cole took his place.  We still sort of got the final chapter, when Gargano won a master of storytelling match against Adam Cole, Tommaso Ciampa appeared on stage to congratulate his long time friend and rival seeing him finally take his rightful place as the NXT Champion he was meant to be.  With all of that said, I'm sure another masterful story will be told here, but not with the same result.  The fact of the matter is this, like The Rock, John Gargano doesn't need a long title run to cement his legacy.  Johnny Gargano is NXT and as we all know the money is in the chase.  It's time for Adam Cole to take the ball and role with it or a very long time.  Nobody in NXT has the tools that Adam Cole does.  I expect him to have a long and great reign as champion and as I said earlier this eventually culminating in the Undisputed Era become the greatest force in the history of NXT and all four members eventually holding every single title and ruling over NXT for he foreseeable future.
So that's the card for NXT Takeover XXV, it's sure to be a great show.  It surely will live up to the hype I'm sure and prove NXT can truly stand on its own.  For now I'm MikeJC signing off.
NXT sports entertainment Takeover wrestling WWE