The NXT Invasion That Almost Wasn't 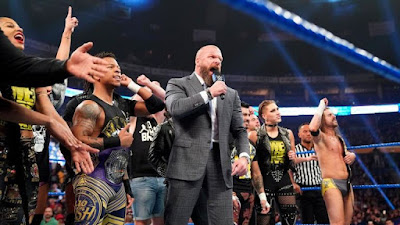 So here we are, post pointless Crown Jewel show number two of the year has passed.  Not only was the show bad, but political drama between Vince McMahon and the Prince of Saudi Arabia ensued and caused not only a twenty-four hour delay of the flight to bring the WWE roster home, and possibly destroyed the trust between Vince and his entire roster, but they also had to scramble to rearrange the entire Smackdown show that took place the day after Crown Jewel.  Despite the drama that caused it, this turned out to be the best Smackdown shows in years.

Vince McMahon, enlisted the help of Triple H and the NXT roster to save the day, after trying his hardest to get legends to come through, and talent that hadn't appeared in years to make one off appearances to fill the void, NXT was the saving grace.  Even Brock Lesnar, who was supposed to going home because he got to leave Crown Jewel immediately because he has his own plane, made an appearance on Smackdown, this appearance was probably the worst thing that happened on this Smackdown but I digress.

With the recent announcement of NXT being involved in the brand supremacy dynamic taking place at Survivor Series, this was the perfect time to run this angle, that wasn't even supposed to happen.  Smackdown was laid out already, when the talent couldn't appear the whole show was rewritten last second and the NXT roster was chartered to Buffalo (the destination of this Smackdown) and arrived with five minute before Smackdown went on the air.

NXT was made to look like heavy hitters, and their champion, Adam Cole, was made to look stronger than ever by beating Daniel Bryan clean in an impromptu NXT Championship match in the main event.  Not to mention, this was the first time ever that Bryan and Cole ever faced eachother, and they had one of the best matches on Smackdown in a long time.  Even the commentary was a breathe of fresh air, Tom Phillips was better then ever and Renee Young really shined in the number two chair.  Also Pat McAfee, was used as the NXT spokesman the whole show and he did his job perfectly.

It's safe to say Smackdown hasn't been good, and I think we all know why, constant over scripting of everything, and the only saving grace in recent weeks has been the transformation of Bayley, and I don't think I'm the only one who noticed that Smackdown kind of got screwed in the draft, even though they are supposed to be the "A Show" now.  Something needs to change and with Brock Lesnar going to RAW (apparently), there's no reason you can't send at least three people over to Smackdown in return.  This show proved that when WWE's back is against the wall they can put on a good show, but this isn't gonna be the case every week, not everything needs to be scripted, things that look and feel organic are the things that make a good show, that was literally everything about this show.

Now I don't expect NXT to make appearances on every RAW or Smackdown going into Survivor Series, I don't even expect RAW and Smackdown to possibly make more than one appearance on NXT as retaliation, but the fact that WWE fell into this storyline could be the best thing that's happened to them in a long time.

I have one big concern going into this, and that's the same layout that always happens at Survivor Series, where all the champions face each other in this case it would be triple threats all around and one big elimination match between brands of people who aren't champions.  I don't think we need that this time around.  You can still have triple threats between brands but don't make it "whose the best champion" between the three brands, it should be the top people of each brand no matter champion or not.  Honestly I don't even need Brock Lesnar on this show if he's not defending his title.   I'd rather see actual storylines put in place, I say have Bray, Brock and Cole defend their titles in singles matches, let the rest handle the "brand supremacy."  Also the War Games Takeover is the night before, so we don't even need championships defended on that show, defend them at Survivor Series.

For me this is the best way to go, first have the biggest names have the triple threat matches.  Let me add that all of this is off the cuff and even if it went the way I'm suggesting the participants could definitely be different.

Randy Orton vs. Shinsuke Nakamura vs. (if  healthy) Velveteen Dream or Matt Riddle.

Then we can have a single 4 vs. 4 vs. 4 elimination match for the men.

The women can still have a triple threat between all the woman singles champions because unlike the men this match is less predictable and way more appealing to see with the talent involved.

As well as a 4 vs. 4 vs. 4 elimination match between the women as well.

Then all the tag team champions can have a match between them cause that would be one hell of a match.

Viking Raider vs. The Revival vs. Undisputed Era.

Then finally all the world champions can actually defend their titles against people on their brand.

This is how I'd book this show and you'd have the dynamic of people who normally feuding teaming together on some of the teams like always etc. but instead of telling me I have to see Brock Lesnar versus Bray Wyatt versus Adam Cole which honestly doesn't sound very good for Adam Cole does it?  Do this!  This would be a more then solid ten match card and one hell of a pay-per-view at that, and as long as there's some kind of stakes involved, it could be a memorable pay-per-view we remember for ever.  Do I have hope WWE would book a show like this absolutely not, knowing them they will just have all the champions face off and have elimination matches etc. like always and there will be no stakes at all.  I hope WWE does this right but all we can do is wait and see.

That's gonna do it for me I'll be back at the end of the week to predict the the next AEW pay-per-view this weekend, Full Gear.  Thanks for reading, look at for more articles down the line, and some new projects that I'm still trying to get off the ground, and thanks for the support by people who enjoy my stuff.