WWE Doesn't Know How to Do a Draft Correctly 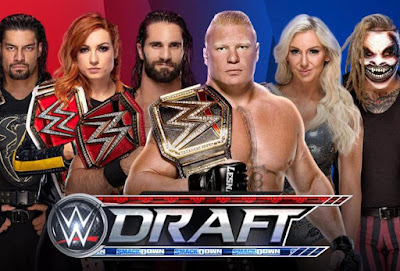 I'm gonna start this off with a question that every wrestling fan has probably asked themselves at some point, Do we expect too much from WWE?  If you have asked yourself this question at any point in the last decade, congratulations, your a real WWE fan.  This past Friday into Monday, WWE had there second draft in three years.

Usually this is done when the roster is being split into separate brand exclusive rosters, but this time around the reason it happened was because WWE went out of there way to ruin the brand split by coming up with the "Wild Card Rule".  In the beginning, the "Wild Card Rule" meant that at any point 4 (or 5, and this changed a lot) superstars from other brands could just show up on the opposite brand just cause.  To this day nobody knows why anyone in WWE let this happen, and why Vince McMahon thought it was good idea. They still had brand exclusive champions but everyone was going everywhere, no sense at all.

So then the FOX deal finally came, Smackdown is now on broadcast television, basically competing with USA which is the home of RAW.  That's great, that's new, because usually every WWE show is under the same umbrella, with NBCUniversal, and now essentially the shows truly are competing.

The problem, WWE doesn't know how to handle a draft anymore.  They released the guidelines of this draft by saying that over seventy superstars would be put into two separate pools and would only be eligible to be drafted on that specific day, Tag team's would count as one pick unless, a brand chose to draft one person separately.  RAW would get three picks every round to Smackdown's two picks because RAW has an extra hour (which has needed to go for a while now).  All of these guidelines, are very stupid.  The way this was handled was just horrible.  The only thing I liked about all of this was that they said "the networks would be making the draft picks", which really meant WWE made the picks, discussed it with the networks and changed things as needed, but it essentially did away with on-screen authority figures which I've been saying for years needed to go away.  WWE even went out of their way to hire bad actors to play the "network representatives" in a war room scene reacting to picks, which was very corny but it had a sports feel to it which I liked a lot.

Here's the thing, a lot of the actual picks they made, kept people on the brand they were already on, even though a lot of fans probably forgot what brand people were on at this point.  The first thing they messed up was brand exclusive champions should not have been included in the draft pools, because why would it even be a thought of the RAW exclusive champions being drafted to Smackdown and vise versa.  They couldn't possibly think it would be okay for Becky Lynch to get drafted to Smackdown but stay on RAW until she loses the RAW championship, could they? Then you have certain champions or people who have been thriving being drafted after people who haven't been on TV in months, certain injured people being included in the draft pools and not being included, people who aren't on TV who didn't even get mentioned like The Usos, Naomi, etc. why though?  What was the planning there, the answer is none.

Then on the first night of the draft WWE "accidentally" leaked the exact draft order, and when they realized it, they broke the tag teams drafted together rule by drafting Alexa Bliss and Nikki Cross separately to the same brand.  Then "traded" Alexa and Nikki to Smackdown for "future considerations" which ultimately means they don't know who to move to RAW and nobody probably will.  So they wasted a RAW pick by picking them separately then traded them to Smackdown for nothing, resulting in two wasted picks.

This isn't hard, all you really have to do is actually try.  Does Vince McMahon know how to do that anymore?  Is making sense of everything so hard that Vince McMahon would rather do it badly?  I don't know what to say anymore about this crap, and then all their next pay-per-view is cross branded matches?  The biggest thing that WWE needs to do is, make things make sense.  Continuity is key in telling stories on TV.  How is WWE not able to do this?  Something needs to change big time.

Do I have hope for this to work out?  Only time will tell but we say this about WWE a lot, and Vince McMahon needs to care as much as fans do, and he clearly doesn't.  I say this a lot, as wrestling fans, we watch no matter what cause we love it, and I don't complain just to complain, I complain because I want everything to thrive how it should.  WWE isn't thriving at all right now, and again will it ever again? Either way I hope WWE starts to give us, A. reasons to care about things, and B. Make it all matter.  I don't think that is too much to ask.