What is WWE Doing With the WWE Championship? 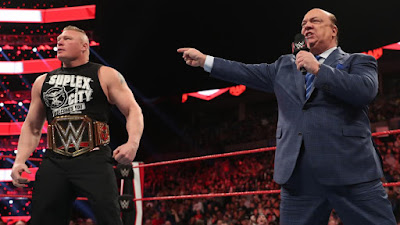 So since Survivor Series the WWE Championship has been absent from television, why is that you ask?  It's held by Brock Lesnar that's why.  As is the usual whenever Brock Lesnar holds a championship in WWE, he shows up when he feels like it.  Comes to RAW doesn't say a word, then leaves. Has a championship match at the pay-per-view, then takes another break.  I've been tired of that for a while and I'm not even here to talk about that today.

This Monday, Brock Lesnar returned to television to once again not say a word while Paul Heyman did all the talking, and then leave.  This time for Paul Heyman to announce that Brock, who once again let me reiterate, the WWE Champion, will be entering the Royal Rumble match at as the number 1 entrant so, one thing that was never said throughout the show was whether he'd be defending the WWE Championship.  Now as we all know as wrestling fans, ever since 1993 the winner of the Royal Rumble gets a guaranteed WWE (or Universal) Championship match at Wrestlemania.  On two occasions, the Royal Rumble winner won championship for winning, in 1992 when the championship was vacated, and 2016 when Roman Reigns was forced to defend the championship in the match.

My biggest problem with this concept is, if Brock is entering the match and not defending his title, I find it completely pointless.  Now I get it the whole point is to make him look dominate by entering from the beginning and getting to face everyone he can because "he's too dominate to defend his title in a 1-on-1 match", even if that were true the reason is because WWE doesn't know how to build baby faces at all.  Getting back to my point, if Brock isn't defending his title in this match, that means he is in there for no reason, making this completely pointless, because if he wins what would that mean?  He gets to face Bray Wyatt and Mania to unify the belts, or just hold both and not unify them.  Also if he does defend the title and he wins, what does that mean?  That would make the rumble a complete waste of time.

WWE has this thing where they enjoy keeping us guessing.  Instead of just giving us all the details outright, when that's exactly what they should be doing especially in this stupid, stupid situation.  A better idea would have been, to have a number one contender match, between three or four top talents on RAW, Drew McIntyre vs. Randy Orton vs. AJ Styles vs. Ricochet for example would have been perfect.  Now you might ask what those people did to earn a title shot, that doesn't seem to matter to WWE these days so it shouldn't here.  To me Drew McIntyre could have been the one to win that match, because he deserves it the most out of those four.  Then, shock the people Drew wins!  Whether it be clean or by interference by whoever Brock is going to face at Wrestlemania.  Then you can have a legitimate feud between McIntyre and Randy Orton for the title going into mania, the belt is off of Brock and he moves on to something else.  That wasn't hard I came up with that all my own.

Word going around is that Brock's mania opponent will be someone in the rumble and they won't be on RAW.  If that's true, he cannot be champion going into mania.  So that would mean he has to lose the belt before mania or even at Royal Rumble.  I'm just so tired of the constant, "we'll figure it out when we get there" mentality going on in WWE or at least it seems that way to me.  There's no doubt in my mind that's what this "WWE Champion in the Royal Rumble" business was.  They were probably going back and forth for months on what to do with Brock at the rumble, and this was thought of in 10 minutes on Monday, right before Brock and Heyman walked out, doesn't that just sound crazy?  It sounds crazy because it is crazy, and based on things we've all heard, not unlike Vince McMahon at all.

Let's not forget that WWE gave the title to Lesnar just so he can defend it against Cain Velasquez, and that was a complete failure in my eyes, WWE could have had that match with out a belt.  Kofi was put on the back burner completely and since Xavier got hurt he's had to basically pretend he never was champion and that it didn't bother him at all that he was fed to Brock when he didn't have to lose the belt.  They could have kept the belt on Kofi and moved him and the New Day to RAW.  Everything Brock has done since winning the belt, didn't need the belt, and neither does this royal rumble business.

Now I can't stress this enough, I talk about these things because I care about wrestling.  I care about how wrestling is doing, I care about how the championships are treated, I care about the stories being told.  So when I get comments on Twitter for example and someone tells me "then just stop watching", that statement defeats the purpose of my complaint.  I'm not "complaining" because I want to stop watching, let's call it constructive criticism, I love wrestling as I said before, so my criticism of these types of things that are clearly stupid and not explained, to me and many others is warranted.

So who knows for sure what the real plan is here, hopefully it doesn't disappoint, like most things do these days.  Hopefully more details will arise and it will turn out to be a good thing but for now until this Brock Lesnar situation works itself out I will criticize it to hell and back because it isn't helping wrestling get better.  That's gonna do it for me, make sure to check out future articles and projects of mine and thanks for taking the time to read what I have to say.