The Wrestling Community In a Nutshell 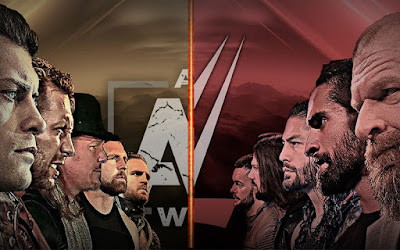 So here we are the Royal Rumble has passed, WrestleMania season, has started once again, also NXT is more stacked than ever and gets better and better.  AEW is building to their first Pay-Per-View of the year.  There's even NWA and they are putting on a pretty good show the past couple weeks as well.  There's a lot of wrestling out there to enjoy and to also criticize.  As a WRESTLING fan, and I emphasis that word for a reason, I watch as much of it as I can because I enjoy WRESTLING.

Now I get, the Monday Night War had people picking sides forever, when I was young I didn't watch WCW ever.  I get it, but in this new era, of social media and the "Wednesday Night War" people are taking it a little too far.  Wrestling is better then ever before, the talent is different, the quality of the matches is way different.  So if your a wrestling fan whose picking sides, your not a wrestling fan, your a WWE fan, your an AEW fan, etc.   That's not a bad thing, but if you go out of your way to talk shit about the other just because one does one thing, then can't take it when the one your defending was already doing that thing, your stupid, I'm sorry for the bluntness but it's true.

WWE does stupid stuff every week, most of Smackdown has been very, very bad, however as a wrestling fan we endure because of our love for it.  I just want to be clear I know I've stated my dislike for this type of attitude in the past and it isn't because of a particular reason or post, but for example.  When AEW had that creeper in the Dark Order who had the worst working punch ever for whatever reason, everyone hated it cause it was right in front of the hard cam it was very hard to miss.  Then a few weeks later Rhea Ripley didn't punch someone as badly and was still making contact, but you have a few people go out of their way to say, and I'm paraphrasing of course nobody in particular of course, "WWE people attacked that creeper guy on AEW so you better have something to say about this."  That right there is the problem.

Another example is hating certain storylines and forgiving others just cause.  I've legitimately seen people who hated the Rusev/Lana/Lashley situation so much but excused the Nightmare Collective, that doesn't make sense.  They were equally stupid and horrible, I knew that so if you liked one or the other just cause your a WWE guy or an AEW guy again, sorry to be blunt, that's stupid.

Let me just reiterate I'm not attacking anyone, this is really me just making a point, enjoy wrestling!  Stop picking sides and stop going out of your way to attack people for like one or the other.  I love wrestling no matter how bad or good it is.  You might be frustrated with certain things, I know I am, as I said before, Smackdown is almost unbearable right now, but I still watch it, why?  I love wrestling, and I do this especially because I like to express my concerns, doesn't mean I'm gonna stop watching it.  Enjoy the good things in WWE, enjoy the good things in AEW, enjoy the good things in NXT, enjoy NWA in general because there's really nothing bad about it.  Thanks for reading, and look out for more in the future.