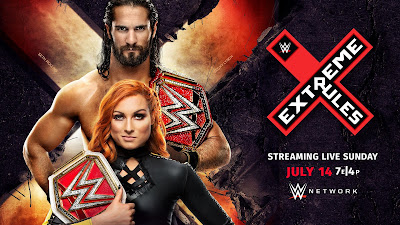 Continuing this jam packed wrestling weekend, there's also the WWE streaming of the Evolve 10th anniversary show, which I'm not gonna preview because it's just been being streamed by WWE as a bitter ploy to keep people from watching AEW on the same day and it isn't a great card, very predictable.  Regardless here we are WWE Extreme Rules 2019, lackluster builds and pointless matches all around this show, and let's not forget the long list of wrestlers that aren't being used while Shane is all over both shows.  So let's run down the whopping 10 matches for this show.


These two, always seem to have a great match together, they have great chemistry because of their real life friendship and history together.  So I'm sure it will be another great outing by these two.  I expect Gulak to win because the cruiserweight title has never been one to be flipped back and forth, this is Gulak's time to shine, and to be honest I feel both these guys are too good for 205 Live but regardless for now they are probably going to have a banger of a match.


Raw Tag Team Championship
The Revival vs. The Usos


So this rivalry has gone in all different directions, it's stopped and started again, it was bad, it was good, but it was never what it should have been two of the best tag teams just having great matches to prove who is the best.  Months ago they had stupid Vince humor in this rivalry (If your unaware it's gaga or "comedy" that only Vince finds funny) with body shaving and crotch powder.  That isn't something wrestling fans want out of these teams at all.  So I'm hoping for a stellar tag team match, no interference, no Shane McMahon, just a straight up tag team match, hoping for a Revival retain, but we'll see it's very likely The Usos can win.  I'm still picking the Revival.


This rivalry doesn't make much sense to me at all.  It started because of a random match that was originally put together on Super Showdown.  It led to arm wrestling matches, and a tug of war, both things that don't belong on a wrestling show.  Both of these resulted in brawls and no real story to talk about.  They had a falls count anywhere match that resulted in a no contest after a spear through the titantron, which WWE underplayed because they turned the tron back on later in the show.  I assume this will be the end of this rivalry and Strowman will win.


I'm very excited about this match, I love both guys work and I've been dying for both of them to do something.  The build to it has been very very weird.  Aleister has been doing backstage promos for monthes with weird hidden meanings, and eventually it led to him wanting someone to knock on his door to "pick a fight" with him.  My whole thing is he could have just attacked whoever he wanted to.  Regardless, it's sure to be a great match, and I hope both these guys do more going forward, I'm very excited for the match and I'm sure Aleister will win.


So when Alexa first became the number one contender for a Smackdown championship, while being a Raw superstar, I absolutely hated it, and that hasn't changed.  There's so much great talent just not doing anything on Smackdown, so for Bayley to be in a feud with a Raw superstar, is and has been dumb.  I was on board with this Alexa/Nikki story as a Raw storyline for the tag titles.  This Nikki wrestles to earn Alexa opportunities is dumb, I hate it and now they're doing this handicap match (I heard because Alexa has been legitimately very sick.) but Nikki can't win the belt if she wins.  That's stupid, and Bayley needs to win and move on from this, none of this co-champions bs they claim could happen.  So I'm picking Bayley and begging for this to be over.


This will be the third time these two will be facing off and the second time for the title.  I'm excited about it because there's a new dynamic at play, AJ is a heel.  I prefer him so much more as a heel and in a group.  The Club is back together, and I love it.  I expect this to be the best match these two have had in WWE, there won't be any shenanigans that leads to a restart or anything like that, just an amazing match (hopefully) and I'm picking AJ here because of the Club possibly getting involved and the real good chase Ricochet can have to another opportunity and hopefully these don't face at all until that next encounter, and that includes tag matches.


This match has the potential to be the match of the night, the recent matches all these teams have had separately have been great, including a triple threat featuring one member of each team.  I wanna see if Heavy Machinery can hang with both teams and put on a great match, I wish WWE would stop booking them as jokes who say a stupid catchphrase every five minutes and made them a serious contender.  They can prove it with this match and going forward.  The other two teams there's no concern they're all great and know exactly what they are doing.  Should be a good one and I'm gonna pick Heavy Machinery to win, I could also see Bryan and Rowan retaining but I really want Bryan back in the world title picture.


Even though this match could be great, the fact that Joe is on Raw now, bugs me a lot, just like the Smackdown women's title match, but regardless, I'm sure this will be a great match.  I'm sure Kofi is going to retain, possibly setting up a rematch or even better a triple threat with Bryan which would be insanely good.  The story has been odd here, Joe is showing Kofi respect even though he attacked him a lot.  Once again someone gaining a title shot just by attacking Kofi, which will always be stupid.  So I'm picking Kofi.


This match is very, very unnecessary for three reasons, Shane and Roman feuding is and has been very dumb and shouldn't have happened, Drew McIntyre is better then this, and the Undertaker has no real reason to be in it.  With the recent events involving Kevin Owens, this is going to end, whether Owens has a match probably with Dolph Ziggler is unknown at this point but either way he'll probably be getting involved in this match leading to him face Shane at Summerslam and hopefully we won't see Shane for a very long time after that.  So I'm picking Roman and Taker here and hopefully Roman moves on to bigger and better things.


I am not happy about this match, I am not happy about the build, I am not happy about how Seth is being treated like, he's second to Becky either.  Also there is no reason for any of this.  I get it two of the biggest names in WWE are champions and they're dating but none of this needed to happen at all.  Also Evans and Corbin had no right getting another opportunity at a title, when they continue to lose clean each time.  None of this was needed or necessary and I hope that going forward after Becky and Seth retain cause they most definitely will, after they do they will go their separate ways on TV, stupid match.


Okay so that's it, safe to say this show is going to be interesting at that, and when it's over we can look passed it and never talk about it again.  I know I'm being very critical and usually when I am it ends up being good, so we'll see. Either way that's it for me, enjoy the show (or try to at least), and hopefully the build to Summerslam is treated better then most of the build to this show.﻿﻿
AJ Styles Aleister Black Becky Lynch Extreme Rules Kofi Kingston Ricochet Roman Reigns Seth Rollins sports entertainment Wresting WWE