Is It Clobberin' Time? 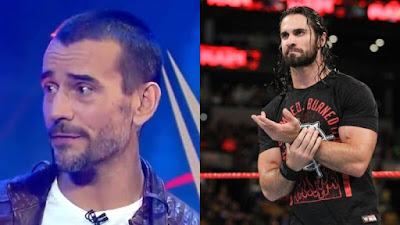 January 26th, 2014, the last time CM Punk was seen inside a WWE ring.  Six years this coming January, CM Punk walked out of WWE, and at one point it seemed like he was dead set on never returning, never stepping in a ring ever again.  He went on to other projects, and even tried MMA and completely wrote off wrestling all together.

Fast forward, to November 12th, 2019, WWE Backstage, a studio show similar to NFL Live for WWE.  At the very end of the episode, Renee Young said that WWE Backstage deserved some moments just like RAW or Smackdown, and we heard that familiar static right before Cult of Personality played, and CM Punk appeared, and he proclaimed "Just when you think they have all the answers, I change the Culture."  Now everyone has to understand, this isn't a WWE contract, it's a FOX contract.

With that said this needs to be thought about at least, CM Punk didn't watch wrestling, discuss wrestling, or even acknowledge wrestling for years, mainly because of his disdain for how he was treated right before he left, a lawsuit with a doctor, and just not wanting to be involved anymore, now he's on a show where his job is to talk about it.  It's not out of the realm of possibility that down the line when the time is right, he will get the itch again, he will want that feeling again, and finally hope to fulfill that one dream of his to close out Wrestlemania.

Now let's talk about the elephant in the room, literally the day CM Punk arrived on Backstage, Seth Rollins challenged him to a match, and they've been trading insults back and forth and then Seth appeared on Backstage and Punk wasn't booked that day, and it continued.  It's clear they are working here, and are preparing to clash sometime down the line.  Punk isn't an idiot he knows the fans want to see it.  The question is, is this a Wrestlemania main event?

If it's built correctly (which is a stretch in WWE) it can be, and here's how I would book it.  Now hopefully Seth is a full heel at this point, right now it's very clear he's heading there but he's still on the fence, he's acting like he cares, and all that but I'm sure we're gonna find out down the line that he doesn't.  Now for me the only way this can be the last match of Mania, is if it's for a title.  So at Royal Rumble I say have a triple threat, Brock Lesnar vs. Drew McIntyre vs. CM Punk, Punk wins by pinning McIntyre, then at Elimination Chamber, Seth earns a title shot, and we have our match, CM Punk vs. Seth.  While all of this is taking place, Seth and Punk can throw insults at each other on twitter at Royal Rumble they have a interaction and stare down backstage, and after it's all said and done, the build to Wrestlemania can and will be glorious.  Will WWE book it this way if it's in the cards, absolutely not.  WWE will certainly find a way to make us hate the build of whatever they plan.  Also I'd like to just add if you haven't seen it or don't remember, watch CM Punk vs. Seth Rollins from RAW on December 30th, 2013 its one hell of a match, and it's a good appetizer and also the one and only time these two have worked before.

So we will see what happens down the line, surely if CM Punk is willing and the money is right the match will happen.  I hope if it does it's done correctly, and I don't expect CM Punk to have a match at Mania for anything less then the final closing main event match so in due time we will all see what happens.

Thanks for reading what have to say and don't forget to check out future articles on this site and as well as the new site I am contributing for The Daily Chinlock, at https://thedailychinlock.home.blog/